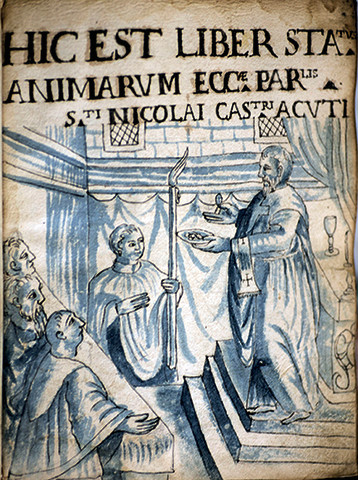 Piazza San Nicola is a panoramic terrace overlooking the Sacco valley in the historic center: from the side of the Ernici mountains the view opens up south to the Lepini mountains. You can see the cities of Anagni and Paliano, and more over Sgurgola, Segni, Colleferro and Valmontone. In the direction of Ferentino, Monte Porciano hides the lake of Canterno from the view.
Until 1758 this area was occupied by the church, built around the 11th century, and dedicated to St. Nicholas Bishop of Mira. A single stone window, on the eastern side of the entire building, part of the ancient bell tower, has come to the present day. The church was one of the first nucleuses of urban expansion close to the medieval fortress overlooking onto the above Piazza della Corte (now Collegio). In these two squares are located, until the middle of the 18th century, all the main public buildings: the bishop’s residence where justice was administered, the town hall, the church and the bell tower with the only public clock, active since the end of the 15th century.
Was possible to enter the church, located few meters lower than the road, descending some steps through a courtyard. At the end of the 16th century, since it was impossible to extend it, San Nicola lost its main church status in favor of the church of S. Maria Assunta, although it remained the most populous parish in the country. It was finally demolished in the mid-18th century due to structural problems and water infiltration by order of the Bishop of Anagni, Mons. Monti, that wanted a more modern and high-rise building, which opened directly onto the main road. The works, immediately started and carried out with the contribution of the population, were interrupted by order of his successor Mons. Filipponi, around 1767. The rebuilt structures remained incomplete and without coverage until 1900, when the Municipality of Acuto acquired the area to turn it into the current square. The stones and other materials deriving from the demolition were reused for the construction of the road that leads to the church of San Sebastiano, at that time outside the inhabited area.