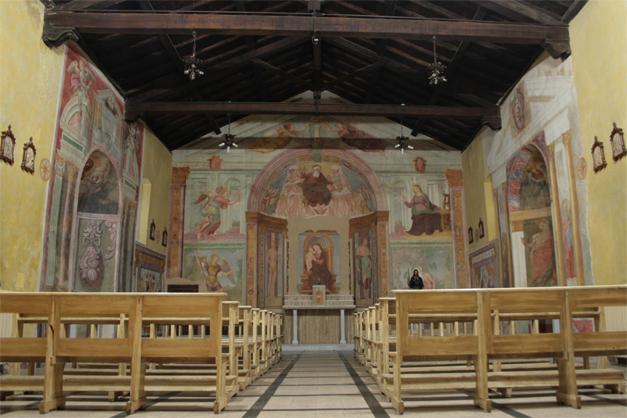 Church of San Sebastiano
The Church of San Sebastiano dates back to the 13th century. Built at a certain distance from the inhabited center, it carried out the dual function of welcoming pilgrims in Jubilee periods and travelers in general, on the occasion of the quarantines imposed during the frequent epidemics. The naming of the church was then extended to San Rocco: two saints gathered together precisely by the protection they were able to guarantee against various diseases and in particular the plague. The interior of the church is characterized by the cycle of 16th century frescoes with the images of St. Jerome, the Annunciation, the Father Almighty in the apse, inserted into architectural structures of Renaissance taste, thickly decorated with grotesque motifs. On the background of the image of St. Michael the Archangel, we can identify the profile of a country that is probably Acuto as it appeared 500 years ago.
San Sebastiano and San Rocco are represented together with a Madonna with child inside the apse, perhaps made by the Bishop Torelli in 1528, a few months after the Sack of Rome and the subsequent plague epidemic. Other frescoes always dating back to the first half of the 16th century and characterized by few variations from similar subjects, interpretable as ex-voto, were made to be performed on the side walls during subsequent epidemics to which the inhabitants of the country survived. A further ex-voto, dating back to 1657, is the plaque placed externally above the entrance door. The two side chapels were frescoed in the 18th century: the right one was built by the Savelli family, and was later dedicated to San Rocco. The left one is dominated by the “magic square” that bears the palindroma inscription “Deo Gratias”, and was dedicated to the Madonna. It is probable that it was precisely in this niche that the Madonna di Acuto was housed, a famous wooden statue of the 13th century, exhibited today in the Museum of Palazzo Venezia in Rome.
During the first half of the 19th century the church of San Sebastiano was finally used as the first extra-urban cemetery of Acuto for the cholera epidemics.