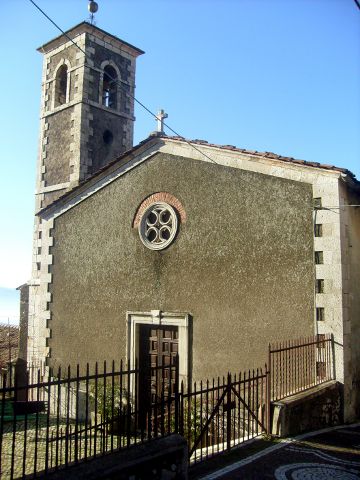 The Church of San Pietro, in Lombard-Byzantine style, is one of the oldest buildings in Acuto. Its original parts such as the central arch inside and the right side wall belong to the Middle Ages going back to the 18th century and have been repeatedly restored over the centuries due to the damages suffered by earthquakes or lightning. The current bell tower was built just at the beginning of the 20th century and was completed in 1907, with limestone, in several orders, in imitation of the ancient Romanesque style.
The church dominates the valley at midday, bounded by the papal town of Anagni and crowned on the horizon by the chain of the Lepini Mountains, and with its cusp it is one of the highest points of the entire city. The façade has been rebuilt several times. The current, entirely restored, was completed in 1949, and bears the imprint of the work of the then parish priest Aristide Tosco, who is responsible for the preservation of the beautiful frescoes on the right wall. A sober and stylized rose window penetrates beams of light from the main façade, exposed to the east, and the two large windows, which open at the sides of the main altar, give the intense luminosity that they reveal, a spatial dimension. The churchyard consists of the square square in front of the façade and still serves as a gathering place, especially on holidays.
The walls are now bare and simple in their pure architectural line. The spatial sense was all entrusted to painting, which was to cover them entirely. The last restoration works, carried out in the first half of the 20th century, on the initiative of Don Augusto Ciolli, whose pastoral action in the parish extended for about fifty years, led to support a whole series of frescoes, which adorned the walls of the Church: of these they remain a precious and superb testimony, those that even today, protected by crystals, shine on the right wall, next to the altar. Evidently the artists, from the Tuscan or Sublacean or Roman school, who took turns painting the ancient medieval church, from the XIIIth to the 16th century, in animating biblical and ecclesial facts, the surfaces of the walls, aimed at a didactic function.